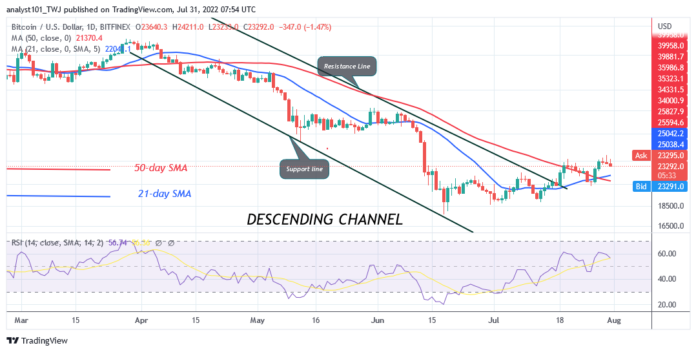 Bitcoin Fails to Sustain Above the Overhead Resistance as Bulls Attempt to Defend $22K Support – July 31, 2022

For the past week, BTC/USD price has been characterized by small body indecisive candlesticks called Doji as bulls attempt to defend $22K support. These candlesticks indicate the  indecision between buyers and sellers. These candles usually lead to a price rebound and breakdown.

Buyers have made two failed attempts at the $24,276 and $24,736 resistance levels. In the first failed attempt Bitcoin slumped and broke below the moving average lines. BTC price reached the low of $20,724 price level as bulls bought the dips. In the second failed attempt, Bitcoin has been trading marginally as it reaches the low of $22,843. Bitcoin may encounter a price rebound if it finds support above the moving average lines. A rebound will break the $24,000 overhead resistance. A breakdown will signal the resumption of the downtrend.

BTC “Wholecorners” Surge by 40,000 Since the June Crash

Smaller Bitcoin (BTC) investors have found an opportunity during the crypto slump to spontaneously build up their favorite cryptocurrency. The number of “wholecoiners” has increased by 40,000 after the June price slump. The cryptocurrency’s price fell in May and June and has coincided with the increase in wallet addresses holding more than one Bitcoin.

Meanwhile, Bitcoin declines as bulls attempt to defend $22K support. BTC price has fallen below the 20% range of the daily stochastic. The market has reached the oversold region. Buyers are likely to emerge to push the price down.

LUNA Marks Another Drop as Price Hovers Around $78