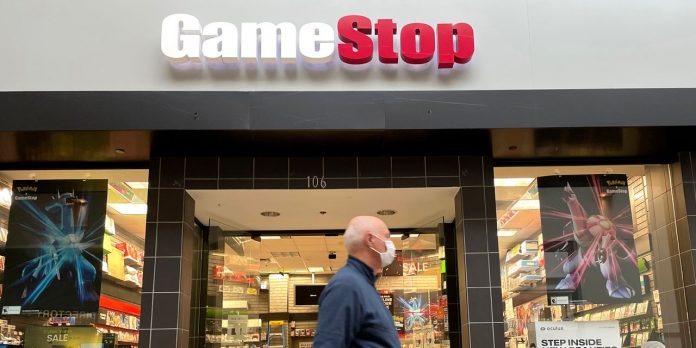 The videogame retailer is making a division for cryptocurrency partnerships, while building an NFT marketplace, according to a person familiar with the matter. The Wall Street Journal first reported on GameStop’s latest cryptocurrency efforts.

Shares of GameStop (ticker: GME) were soaring 24% to $163.50 in premarket trading Friday. They had jumped as much as 29% in after-hours trading Thursday, nearly erasing a recent slide over the past month. The news seems to have at least temporarily reawakened the meme-stock trade from last year. Shares of movie-theater operator

GameStop’s crypto plans have been in the works for months, the person said, adding that the company has retained top crypto advisors to support its efforts while adding at least 20 members to its blockchain and crypto team. The company’s management team believes there’s opportunity for such efforts as more gamers turn to cryptocurrencies to buy NFTs and new gaming experiences.

Reddit users for months have speculated on whether GameStop had plans to launch something with decentralized financial company Loopring, which backs the LRC token. The person confirmed GameStop explored an acquisition, but said the retailer ultimately withdrew from talks amid logistical concerns related to Loopring’s operations in China.

A Loopring representative was not immediately available for comment.

A Large Portion of Bitcoin Supply Stores in Cold Storage Based...

Elon Musk pulls out of Twitter deal amid “false and misleading”...

Persistent low volume could cause Bitcoin price to plummet to $12k...

Brazil’s BRB Bank Pays 50 BTC After Being Targeted by a...