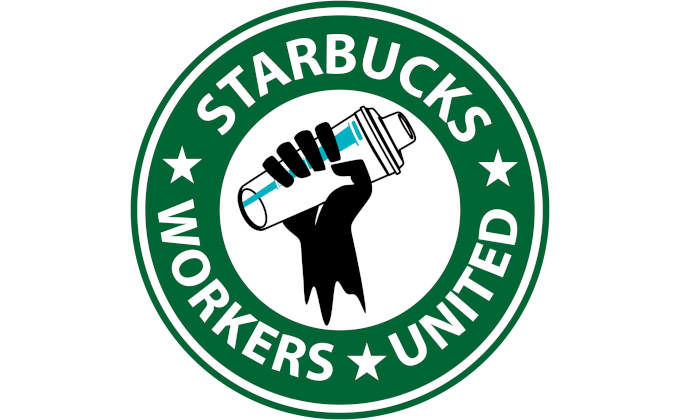 “Please, God, I don’t ask for much from You. But give me this. A video of a sad cryptobro, trying to get a beat cop to make a police report about his stolen ape jpeg.”

There’s very little that’s sadder or funnier than corporate NFT projects that launch after the crypto crash. Starbucks’ NFT programme is the latest. “What’s more, the digital program could give customers a reason to care about NFTs.” Yeah, uh, OK. [TechCrunch]

Why did Starbucks want to do an NFT? Because Starbucks owner and CEO Howard Schultz thinks this will be a shiny object to distract his Generation Z workers from wanting to unionise. Yes, I know that nothing in that sentence isn’t dumb as hell. Remember that this is the guy who ran for President with a logo that was his name with his name on it. [Vice]

If all your apes are gone, OpenSea will freeze your NFTs! But “if we don’t receive a police report within 7 days, we’ll re-enable buying & selling for the reported item. This change will help prevent false reports.” [Twitter]

HitPiece launched in December 2021, selling NFTs of every record and artist on Spotify. The entire music industry found out about HitPiece in February 2022 and came down on it like a ton of bricks, and all HitPiece sites were disabled within about four hours. “Now, six months later, HitPiece is back — and the company would like you to forget about that whole thing in February.” No, I don’t think I will. [InputMag]

Section heading by Klyith on SomethingAwful.

And we all shine on

Reddit is a site filled with forums on every conceivable topic. You can vote posts and comments up or down, and that’s your “karma.”

Unfortunately, there are enough hodlers at a high level that Reddit has been promoting a dumb and bad idea called “Community Points,” where the karma points become ERC-20 tokens that you can buy or sell. Because who doesn’t love pay-to-win, eh?

On 9 August, FTX announced that Reddit Community Points would be “integrated” with FTX. You can trade your made-up internet points on Ethereum. The points were already being traded on UniSwap. [press release; FTX blog]

Reddit uses the Arbitrum Nova sidechain for its Community Points — but FTX say that moving tokens will cost you the Ethereum gas fees. These are much lower since the crash, around $1.16 average transaction fee as I write this.

Reddit’s terms of service still say: “Community Points have no monetary value (i.e., are not a cash account or equivalent), cannot be sold to other users, and cannot be exchanged for cash or for any other goods and services outside of Reddit’s virtual goods or services.” [Reddit]

The “collectible avatars” were greeted with disgust by the actual users. Some subreddits, such as r/shadowban, started banning users with NFT avatars. [Reddit]

Mr. Saylor has now moved on to his next level … of maxi research. This level is beyond anything any one of us ever imagined. This level is in fact done in an exterior state. Meaning, that it is done completely exterior from MicroStrategy. At this level of maxi, the company is nothing more than an impediment, an encumbrance to any further gain as an maxi. Thus … Thus, at 2000 hours Friday, the 24th of January, A.D. 36, L. Michael Saylor discarded the company he had used in this lifetime for 74 years, 10 months, and 11 days. The company he had used to facilitate his existence in this BTC universe had ceased to be useful and in fact had become an impediment to the work he now must do outside of its confines. We felt it was important as bitcoiners, that you were the first to become aware of this fact. [MicroStrategy]

Do you know, in all the years I’ve been following crypto, I’d never heard of any shenanigans from the Gemini exchange. Well, the CFTC sure has, and is suing over a futures offering from 2017. [CoinDesk]

Alexander Vinnik has been extradited from Greece to the US. Vinnik operated the BTC-e crypto exchange, the favoured exchange for crooks to cash out their ransomware gains when it was running. Vinnik is also thought to have stolen a whole pile of bitcoins from the Mt. Gox exchange back in the early 2010s. The US charges are for receiving stolen US bitcoins at BTC-e. [Justice Department]

Apple and Google are coming under scrutiny for the scammy crypto apps on their supposedly-curated app stores. Senator Sherrod Brown wants details on their process for reviewing these apps, and in particular how these scammers get through. Get their asses, Senator. [The Verge; letter to Apple, PDF; letter to Google, PDF]

A staffer for pro-crypto US senator Cynthia Lummis told Forbes that every US crypto exchange, and also Binance, is being investigated by the SEC. Good. [Forbes]

New York has fined Robinhood $30 million for compliance failures on the part of its crypto division. Robinhood Crypto had bad anti-money laundering controls and a compliance division that was understaffed to the point of uselessness, and didn’t have a consumer help phone line. The crypto division tried to punt compliance up to the main company, who weren’t good at this either. [DFS NY; consent order, PDF]

Ben Delo from BitMEX ended up getting 30 months’ probation for violating the Bank Secrecy Act. Delo previously paid a $10 million fine to settle a case brought by the Department of Justice and the CFTC. [CoinDesk]

I left my head and my heart on the dancefloor

I missed this in January — TONcoin, the totally unofficial crypto using the software for Telegram’s abandoned blockchain ICO that definitely had nothing to do with Telegram … might end up integrated in Telegram Messenger? [CoinDesk]

The new TON Foundation is in talks to launch stablecoins in Cameroon, the Democratic Republic of Congo (DRC) and the Republic of Congo — in the central CFA Franc zone, which includes the Central African Republic, which passed an El Salvador-like law to make cryptocurrencies legal tender in April. [Forbes]

Remember that Telegram utterly screwed itself with the failed ICO, because they had to give back all the investors’ money after they’d already spent it.

A number of Telegram’s very good Russian investor friends have reassured the Durov brothers that they are very happy for the Durovs to continue to enjoy the use of their kneecaps, if possible. This is why Telegram has been asking its users for money for “Telegram Premium.” [Telegram]

There’s little more hilarious in crypto and blockchain than just going through the claims and watching the clown car disintegrate before your eyes. Niko Weh found a blog post listing 34 enterprise blockchain projects that absolutely showed there were real-world use cases for blockchains! [BuiltIn, archive]

So he went through them. Most are dead, the blockchain bit doesn’t do anything, or it’s really a cryptocurrency project. The only one that isn’t all of that is Chainalysis, which sells compliance services to real financial institutions — and that’s cryptocurrency too, really. [blog post]

Mailchimp is a non-spam bulk email firm. They just kicked all their crypto customers off: “Please note, we cannot allow businesses involved in the sale, transaction, trading, exchange, storage, marketing, or production of cryptocurrencies, virtual currencies and any digital assets.” Even crypto news site Decrypt was hit. [Decrypt; Twitter]

There just happens to be a class action suit that was filed in April against Intuit, who own Mailchimp, alleging that Intuit “intentionally, willfully, recklessly, or negligently” failed to protect Mailchimp data, and that this led cryptocurrency being stolen from Trezor wallet users. It’s not clear if Mailchimp’s crypto ban follows from the class action, but I wouldn’t be surprised. [complaint, PDF; PacerMonitor]

‘Tis the season for busting international sanctions with crypto! Iran’s trade minister, Alireza Peyman Pak, tweeted about paying for a $10 million import order with crypto. “By the end of September, the use of cryptocurrencies and smart contracts will be widespread in foreign trade with target countries.” [Twitter, in Farsi; The Register]

Charles Schwab has started the Schwab Crypto Thematic Index, a cryptocurrency stock index! Well, it’s a crypto-related index. Well it tracks companies that have some unspecified alleged relationship to crypto — “companies that may benefit from the development or utilization of cryptocurrencies and other digital assets.” The Schwab Crypto Thematic ETF, tracking the index, charges a fee of 0.30%. [press release; Schwab]

64% of UK crypto investors borrowed money to put into cryptos. Now they’re having a few issues paying it back. [KIS Finance]

Remember Beanstalk DAO, which fell to a corporate raid via flash loans? They’re relaunching, because I guess the suckers still have some cryptos left. [The Block]

The crypto collapse has flooded the market for fancy watches. Where’s the John Biggs article, that’s what we’re wondering. [Bloomberg]

“I am a computer science professor. Like my colleagues, I know that bitcoin technology is rubbish.” Old-school /r/buttcoin regular Jorge Stolfi interviewed in El Pais. The interview was conducted in English, so I’m linking that version. [El Pais]

“I left my easy six figure job in crypto because I couldn’t stand to market to such a deranged group of individuals and the toxic web3 workplace. Even though I even enjoy some aspects of crypto… the online crypto communities are extremely bizarre.” [Reddit]

Stefan Rust does a crypto podcast called Super Excited, and interviewed me on it. This came out quite well. Stefan is a huge longtime bitcoin and crypto guy and this was a good chat. [YouTube]

The biggest crypto scams of 2022 (so far): We’re only halfway through the year! With some recommendations from me. [Mashable]

Heard so many great things about this “modern classic” by @davidgerard.

Glad to finally get to it …#blockchain #bitcoin #scam pic.twitter.com/tdT8z27XcG

I’m struck that all the people seeking to “democratize finance” through crypto didn’t think it was worth investing time & energy into supporting labor organizing or raising wages. Oh right b/c they wanted to get rich.

New record for the XRP crypto

How devs can develop xdApps

Response From Tether CTO On Reports Of Shorting USDT By Hedge...

Shiba Inu Price – Can a Recovery Be Expected Or Not?

New York Yankees employees can get partially paid in Bitcoin with...

How This Crypto Notched A 60% Rally In This Area

Are NFTs the Future of Buying and Selling Art? Fort Worth...